by Jaime Lozano and the Familia
Music by Jaime Lozano
Lyrics by Mark-Eugene Garcia
Feat. Raul Midón
Directed by  Efrén Gutiérrez ​
“Hold Tight” is a collaboration between musical theatre composer Jaime Lozano and two-time GRAMMY® Award nominee Raul Midón. The New York Times has declared Raul Midón “a one-man band who turns a guitar into an orchestra and his voice into a chorus.” The song is an unusual collaboration the reunites musicians from very different musical worlds. Joining Midón are pianist David Cook (Ben Platt, Taylor Swift, Shoshana Bean) and Gerardo “Quirri” Padilla, a Mexican accordionist and creator of the very successful Mexican Norteño band LMT (formerly Límite) with arrangement and orchestration by Lozano and long time collaborator Jesús Altamira.

​The song is included in Lozano's album "Songs by an Immigrant."

"The album establishes Jaime as a force to be reckoned with in musical theater, in Latin music, or wherever else he wants to go." - Lin-Manuel Miranda

Hold Tight was listed in People En Español as one of Eight Songs you need to listen to. Check here. ​

What Friends Are For 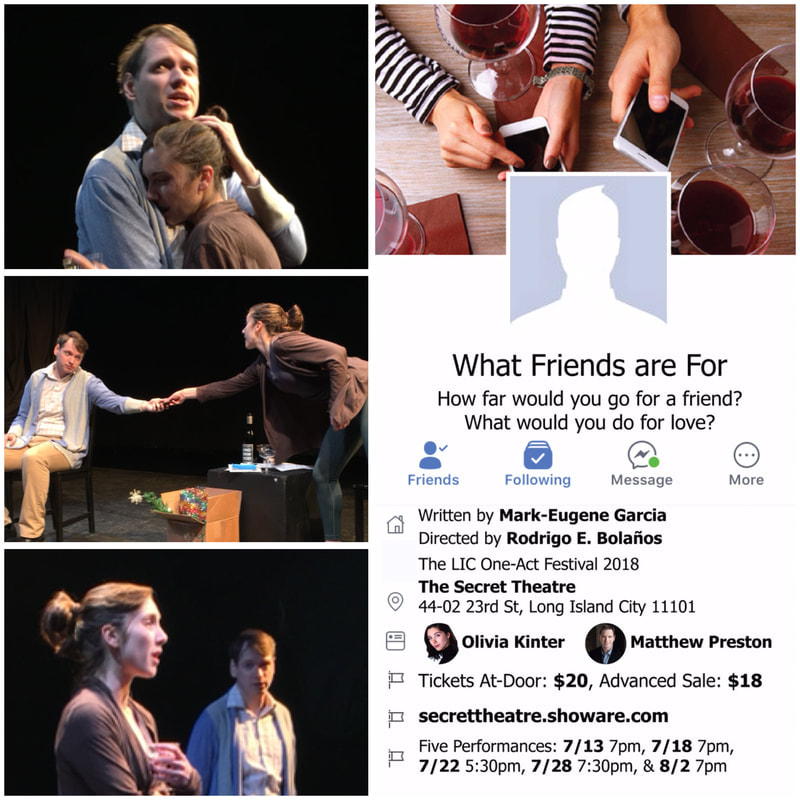 Two friends will do anything for each other. (Lies, Identity Theft, Sexting, Bodies Buried in the Desert...) A comedy about taking the phrase to the limit.

What Friends are For premiered at the Stonewall Inn as part of FACT's Gaylicious at Stonewall in November 2012.

What Friends are For is part of the LIC One Act Festival it the Secret Theatre in 2018 starring Olivia Kinter and Matthew Preston.

What Friends Are For: The Musical

A Musical version of "What Friends Are For" Premiered at Lincoln Center as part of the NYPL's "Across a Crowded Room" Series.
​
Book by Mark-Eugene Garcia
Music and Lyrics by Peter Saxe
​Lyrics by Leah Garber

A young writer, frustrated with his place in life has final conversation with his Mentor.
On May 4th 2012 "Inscriptions" opened as part of "Treasures: A Collection of Short Plays" at the Secret Theatre.

On June 25th 2012, "Inscriptions" was performed at The Puzzle: Marble's Festival of New Works

One Night At the Golden Boot

Travis and Trevor get some very strange relationship advice.
​One Night at The Golden Boot was created as part of FACT's Instant Theatre Festival on January 7th 2012.

Daniel Jericho does not want to be part of his family's family business any longer. He leaves on a cross country quest for fulfillment in this mini-musical adaptation of The Prodigal Son.
The Journey  presented at the Academy of New Musical Theatre