Mark-Eugene Garcia is an award winning playwright and a proud member of the Dramatists Guild and  A.S.C.A.P.  He is a graduate of the City College of New York and studied book and lyric writing with the Academy of New Musical Theatre in Los Angeles and the BMI Lehman Engle Musical Theatre Writing Workshop in New York. 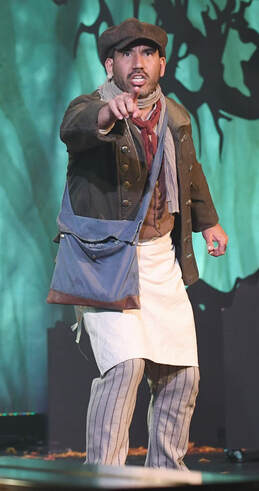 Mark-Eugene's stage roles vary from New York to California, including the shows INTO THE WOODS (The Baker), THE UNDERPANTS GODOT (Mark) , A STRANGE AND SEPARATE PEOPLE (Jay Berman) (Winner- Seymore Peck Award for Sustained Excellence), THE TAINT OF EQUALITY OR I WANT YOUR SEX (Javier Pena), SIX SILENCES IN THREE MOVEMENTS (Sean), THE FULL MONTY (Teddy), LEAVES OF GRASS( soloist) HAMLET (Horatio), THE BOYS IN THE BAND (Larry), CITY OF ANGELS (Pasco,Eugene, Munoz u/s), TOYSOLDIERMARK at Fao Schwarz and many performances at Disneyland and Disney’s California Adventure.

The Cast Album of The Holy Cows of Credence South Dakota is available now!  Check it out! Moo!!!

Mark teamed up with  musical theatre composer Jaime Lozano and two-time GRAMMY® Award nominee Raul Midón with the new song "Hold Tight." The New York Times has declared Raul Midón “a one-man band who turns a guitar into an orchestra and his voice into a chorus.” "Hold Tight" is streaming on all digital platforms.

Mark was to be part of Screen to Screen, the winner of the  Rave Theatre's Social Distancing Fest.

Season one of Demon Doctor is streaming now on Youtube.

Eight Tales of Pedro won BOTH of the New York Innovative Theatre Awards that it had been nominated for-  Best Music- Luis D'Elias and Best Supporting Actor - Federico Mallet, as well as being the winner of  Best of the Festival award at the UnFringed Festival!

Standby was listed in Frolic's Four Musicals you Must listen to immediately!  The Cast Album for is available here.

Mark-Eugene has joined the season 5  cast of Skeleton Crew. Season 4 is available here. ​