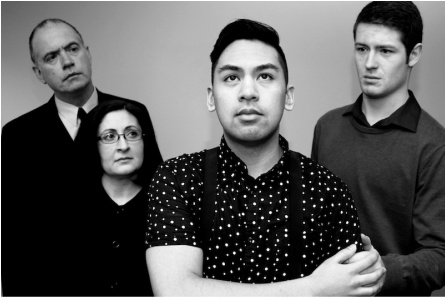 
REVIEWS
"Facing East is both heartbreaking and revitalizing."

"There’s something breathtaking and devastating about Facing East that will leave you feeling like you’ve truly experienced something when you walk out of the theatre. In only ninety minutes, the cast, band and music take the audience on a undeniably human journey that will leave you mourning and celebrating life at the same time." -
- Cassady Ranford, Vancity Press

​"Facing East’s most compelling moments for me are found in its well-acted, intelligent dialogue (book and lyrics by Mark-Eugene Garcia). "
-Jerry Wasserman, Vancouverplays

"Theatre fans who want a challenging and compelling evening of music "rhapsody" whose strains are quite unlike normal stage musical fare to underscore the show's themes will delight in the complexities."
- Baird Blackstone, Broken Leg Reviews

" It’s an emotional rollercoaster as we join Andrew in his pain at not being accepted by those he loves, and his happiness in his ‘other’ life with Marcus."
-Londontheatre1

“There is a show about Mormons that is playing one “developmental-concert” performance in Chicago… Nope, it’s not what you think! This show hasn’t played New York yet, though it’s unabashedly aiming there.”
-The Showtune Moshpit